The Bali Travel Group (https://www.facebook.com/groups/BaliTravelForum/) is one of the fastest growing and most active travel forums about Bali. Not only does this group deliver useful information for newbies about the island, but even a Bali villa owner like me eagerly reads the posts on this forum.

For instance, when flights in and out of Bali were being massively cancelled due to the ash cloud spewed from Lombok’s volcanoes, I relied on the Bali Travel Group to remain updated on the local situation. I was away in Thailand, and I needed to share vital airport information with my Australian guests due to arrive at the villas and with my local staff waiting for them. Believe or not, but the information in this Facebook forum was more accurate than anything on the official Bali airport website!

So, what makes an online forum successful? I believe that a big reason for it is Clare McAlaney. She’s the heart and soul behind this active group. She’s a Bali expert / forum moderator / travel reporter / real person. I asked Baron, my local villa manager, to ask her a few questions to help you get to know her better.

Clare, what made you start the Bali Travel Group on Facebook? 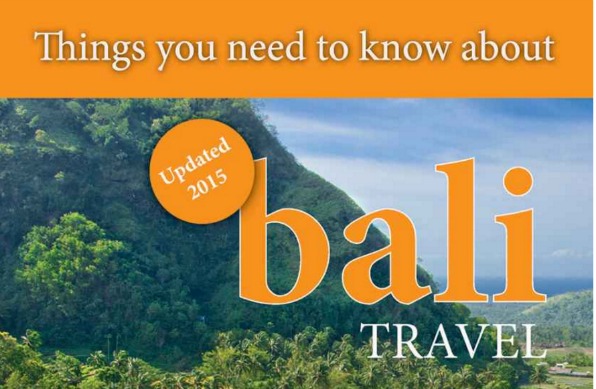 I write books about Bali. Several years ago, I began a Word document with commonly asked questions – friends always turned to me when they were coming to Bali. I noticed that many were the same questions.
So, I wrote a book and published it two years ago on Amazon – Things you need to know about Bali. Last year I reviewed and republished it, and it shot to #1 in travel, became a bestseller, and has stayed in the top 10 books on Bali ever since.
I have a reasonably popular page, but people were not able to ask questions and interact with each other, so felt a community group would serve travellers better. I make no secret that I am a publisher or author, as feel my books reflect the beauty of Bali in an honesty through the eyes of a traveller, and the group has been great to share these gifts.
As time has gone on, I have grown to like many of the people in the group and truly do feel it is a Bali travel community.
Recently we founded Rotary eClub of Bali and the group has been a way to reach out to those who love Bali. We raised over $1,800 as a group in August for water tanks in the dry north of Bali, and currently are raising money for more projects.
So the group has been a platform for good things, and that makes me happy, and drives me to help it be one of the best go-to groups for travellers.

Why did this group grow so fast?

As part of my publishing expertise, social media management is one of the skills I have developed. I was active in sharing about the group, and building a network of people who could see what I was doing and why. Some might call them ‘fans’ – like-minded people who are conscious travellers and look for the best in Bali.
We have deliberately kept trolls out of the group and delete any nasty comments immediately. It has been important to keep a friendly and open feeling in our community.
There is no doubt that the volcano drew a lot of people. I was active on airline pages, letting people know that the group existed. I also went to an effort to remain courteous, even when I was tired or frustrated, as social media can often do!
I also believe in fact not fiction and other groups were frustrating me, as they were not moderating rumours and assumptions. So I dug deep for the truth, and connected with directors of the airlines and anyone who could help me help get information out. Jetstar have been fantastic and while they upset a lot of people, have shown a willingness to learn. I spent 90 minutes with their Director of Customer Strategy, who was genuinely upset they got so many things wrong.
Building an online reputation is tough, because you need to monitor every single thing you say. Some people don’t like it, and that’s okay. They leave. But for the most part, there was a collective appreciation for truth, and supporters began to step up and also help with information, which in turn made the group grow again.
Then, the rest was word of mouth. It does take a lot of commitment, but when the volcano erupted, I felt a strong sense of obligation to the members of the group. Quite a few have come to Rotary eClub meetings, or met me for a drink to say thanks. It was like we had a club room in Bali that was virtual, and developed camaraderie, even when people were going through difficult and frustrating times.
I spent three weeks working 100% full time on the group during the volcano. Our current fundraiser is asking those who promised me a drink to say thanks, to donate it to our Rotary eClub for projects in 2016 in Bali! Let’s see how many still remember the help they got!!

What are your 3 favourite places in Bali and why?

Easy! Only three?! That makes it harder, but here goes!
There are many more! I could write a book about it!

Could you also tell us about your venture called Creatavision Publishing?

I founded it three years ago (prior to that it was Creatavision – a marketing and branding company), because I wanted to publish, but not within constraints of the industry, which takes too long. I am a brand expert and experienced marketer, as well as being a writer, photographer and designer, so felt I could pull it all together and do it myself.

I now have a wonderful stable of books, have worked with gifted artists, authors and photographers, and don’t feel like I am working at all! We sell online and in Australia, and all the books are bestsellers in Indonesia. We have a lot of plans to expand into the Australian market next year. I run workshops on branding and publishing in Australia and come back to Bali to relax and find more favourite spots!

I am an advocate for Conscious Travel, and that is the basis for the essence of the company. We are authentic and strive to help people step up to their potential without stepping on others on the way up! The philosophy is based on having a voice that makes a difference in the world.

Thank you Clare for your time and for your dedication to sharing your love for Bali.